This article is a stub. You can help Ice Age 3 Wiki by expanding it.

Guanlong are a species of dinosaur featured in Ice Age : Dawn of the Dinosaurs. They are also one of the minor antagonists in the film.

Ice Age: Dawn of the Dinosaurs(film)Edit

The Guanlng don't make their appearance anywhere in the film or around dinosaur world until the herd make their way through the Plates of Woe. While on the Plates of Woe, Manny, Diego and Ellie are then attacked by the pack of Guanlong, that appear at the bottom floor coming out from shadowed areas and caves. Manny and Diego stop them from reaching Ellie, who is having her baby, Peaches, at the time.

Their role is mostly the same as in the movie.

They are blue colored with orange red markings, are vivid and covered in prickly quills.

The Guanlong have a variety of unique abilities as they can climb walls using their claws and with their strong legs, can jump high and run at fast speeds. They hunt in packs with other guanlong. When confronting larger or smaller creatures, they work together as a group to take down their prey. 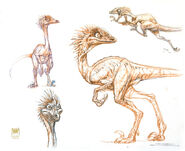 Retrieved from "https://iceagedinosaurs.fandom.com/wiki/Guanlong?oldid=6108"
Community content is available under CC-BY-SA unless otherwise noted.